Another post already, Chris?! Yep, stuff has happened and I wanted to talk about it. Deep and meaningful life events, Chris? Yes, I bought some new headphones and there’s a trailer out for Baby Driver. That’s right. Ever think about writing blog titles that make sense? Not at all.

Let’s start with Baby Driver since that’s most on my mind at the moment. For those of you that don’t know, after Edgar Wright got shitcanned from the Ant Man film, (the finished film is mostly his work anyway) he moved to his other project, Baby Driver. It’s a film about a guy named, Baby, obviously, and he’s…. yeah, he’s a driver. It’s pretty much the film I’m most looking forward to this year. Some would think it would be Guardians Of The Galaxy Vol. 2, but those people would be fucking wrong. WRONG I tell you. This is gonna be great. Edgar Wright turns out nothing but gold. And The World’s End. Here is the trailer. Enjoy.

It’s nice they avoided the obvious musical reference, but I would have still liked to have heard it. Track 7 from 1970s classic Bridge Over Troubled Water, by Simon & Garfunkel, is a belter of a song, called, yes, Baby Driver. Here it is.

On to the headphones. I bought some new ones as my others shit the bed and won’t work now without sounding like I’m listening to music in a hollowed out shell of a tiny plane made of tin whilst inside a wind tunnel. Got the visual? Well played. As usual for me, buying headphones doesn’t come easily and I bought and returned 2 pairs before landing at the ones I have ending up plumping for. Beats Tour 2, in grey and yellow. Grey and yellow. Grey and yellow. Here is a picture someone else took of them because I’m lazy and stealing images from the Internet is easier. 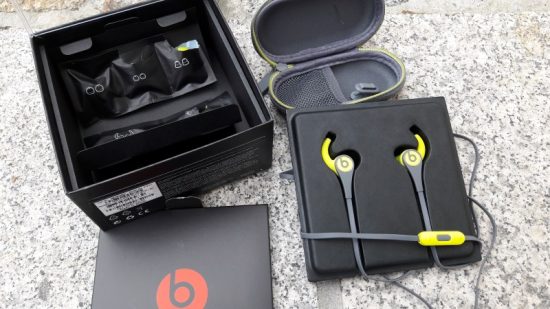 Using them for an hour or so now and they cancel out noise really well, which is one of the biggest things for me. I primarily wear them on my bike, so not being able to hear traffic over my music is what I want. If a car is going to run me over, I’d rather not hear it before it happens, yo. No, I can always hear the traffic but I don’t want it overpowering my listening of Bieber classics. Sound quality is what you’d expect for £110 worth of headphone and they come with a case as well as several different ear attachments to make them as comfy as they can. Weirdly these were foil sealed, like they wanted to keep them fresh and stop them going off. Maybe they’re made of lettuce, who knows. They get a solid 8/10 from me. Tested them using an excessive amount of Sia. Her voice and music tends to hit all the extremes.