A new year, and a new effort to update. Haha. Sure, like I’ll stick to that. Whilst I’m here I may as well give it a go though.

You may have noticed that I’m not on Facebook anymore. A few did, most have yet to realise. Which, to be honest, was part of the problem. When you have to start 95% of the conversations you have with people, why bother. I’m still on Twitter so I can tweet the odd thought I have now and then out into the wilderness. I imagine, since I don’t have Facebook to post my inane drivel on anymore, I might actually manage to update this more often. The only thing I’ve missed about FB is not being able to just upload a picture or whatever when I see something that makes me laugh. I guess I’ll do that here!

Here’s a picture to get us started. I think it somes up my early new year feelings somewhat. 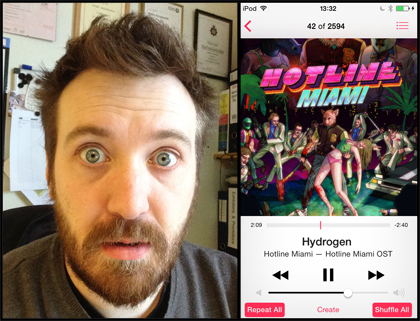 I don’t know why my hair is so upright today.

In other news, the past month has been a bit of a gaming fest for me. I didn’t hit my goal of 300k Gamerscore by the end of the year, but I knew I wasn’t going to. I set the target to push myself a bit more and I feel I did well, netting over 16k in the last 45 days of the year. I believe my average is about 30k a year usually, so that’s some pretty good going.

I’ve got a few games still on the go though, too many if you ask me, but at least I won’t have any boredom issues over the usually pretty empty first few months of the year. Having said that, there are a few big titles on the horizon so that’s looking good.

Currently I’m in the middle of:

And about 10 others which I can’t even be bothered to list. It’s crazy how much I have on the go. I’m getting through them though, which is good. Hopefully I’ll have polished a few more off before I get round to buying anything new. I shall update my XBox One stats later when I can be bothered to add them up. I’m interested to see how much I’ve done on the One in the year since I’ve had it!