I was reading some news on the popular XBox website “x360a.org” the other day when I came across an article about the new Zombie map for the latest Call of Duty incarnation, Black Ops 2. Whilst scrolling through the many comments I came across this one. It was preceeded, as usual by many versions of the standard ‘average’ comment on DLC related articles which goes something like “I’m not paying x amount for only x amount of gamerscore and/or why do they not just give me this for free”. 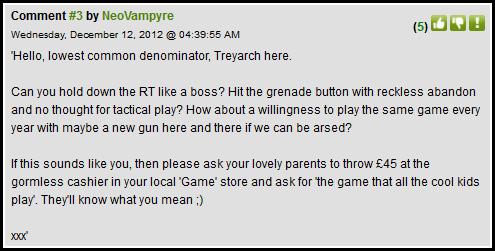 Now, this comment has been in the back of my mind for a few days and I’d like to address a few things. At what point did snobbery enter the gaming world? I’ve seen similar things said, but this post inparticular makes me want to say something. Who cares what other people play? For a start, it’s none of his business what I chose, nor what anyone else chooses to play. You’d think, making this comment that his recent list of games read like the complete works of Shakespeare, or the poems of Blake, but unless Shakespeare had some input on Ben 10, it doesn’t.

I’m not sure why he cares so much that games exist that maybe aren’t as intellectually stimulating as some others are, or why he feels to call the players of such games, for lack of a better word, idiots. Again, who cares? Games exist for anyone and everyone. It’s one of the best things about gaming, that games exist for absolutely anyone to get into the medium. Call of Duty games are reliable. They’re always made to a high standard, and ignoring the people that take extreme views against them as usual, they’re always fun to play. I’ve always enjoyed playing them and don’t ask anything of them other than that they entertain me, which they do.

The easy argument to be made here, against me, is that I play some absolute tripe, and I do, but I make no effort to hide that, and I certainly don’t go around berating others for their choices in what to play. I also play many games just for the gamerscore, as does our friend NeoVampyre here, but again, I’m not making comments like this. At the end of the day, we’re playing video games. Let’s not try and kid ourselves that we’re doing something noble or with any real purpose. I love video games. I’ll always play them. I enjoy the stories, the action, the escapism. I do not enjoy morons. Morons who act like they’re above others.

There is enough conflict around already, with religion, politics and even music. Gaming, at it’s very basic level is about playing games together. If you’re really that much of a snob, put down the pad and go outside. We don’t want to play with you.