Boredom can do insane things to a person. THIS is how bored I am currently. Let’s go! 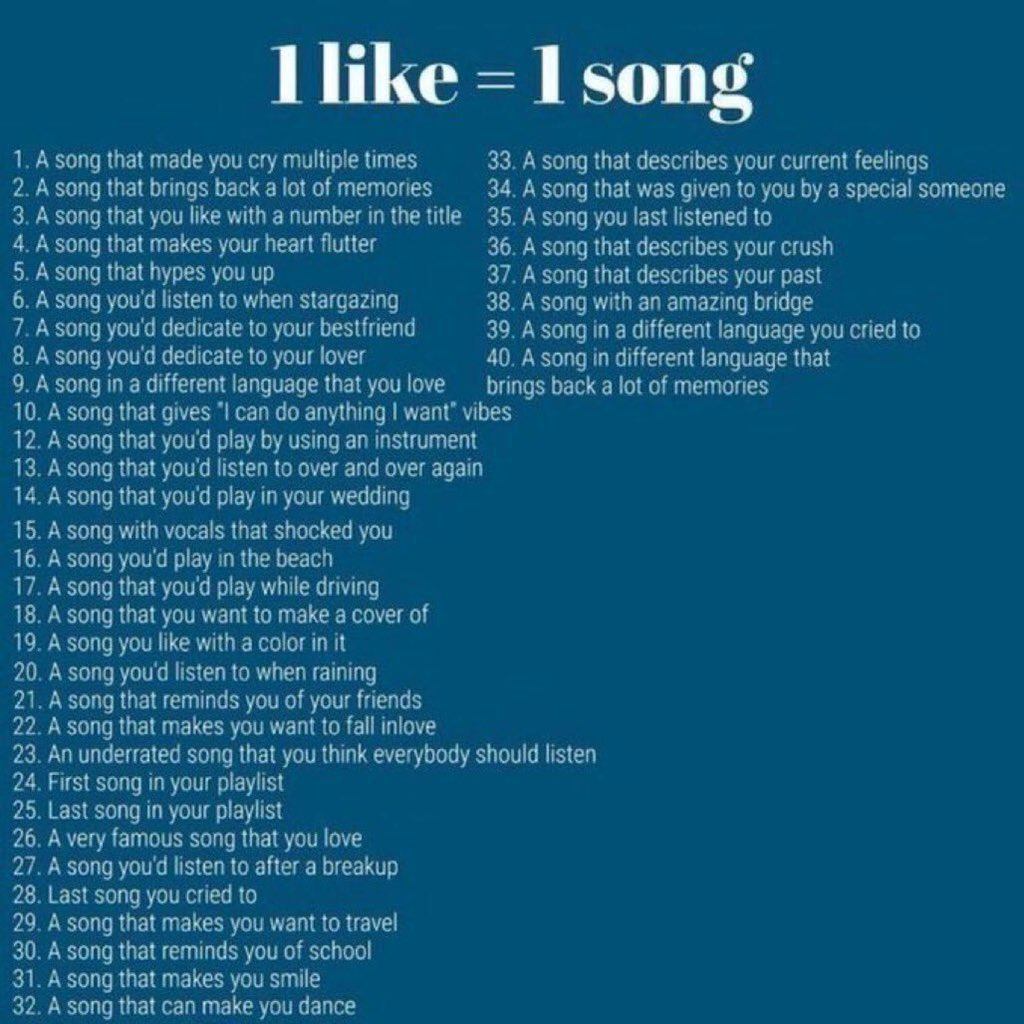 First of all, let me start by saying that this list is terrible. There’s so many moment of poorly worded sentences, repetition across categories and even a number missing. That said, here we go. I’ve put the title of each one up, along with comments if I think it’s needed, followed by my song selection and reasoning. Enjoy.

1: A Song That Made You Cry Multiple Times.

Originally released by Nine Inch Nails in 1994, as part of their album The Downward Spiral, Trent Reznor wrote Hurt about a man at the start of his life. The lyrics are often disputed when it comes to the meaning, some saying it’s about heroine addiction and self harm, whereas others say that it’s more about finding hope. Either way, Johnny Cash obviously took it as being about a man at the other end of his life, living his final days. The point was driven home by the incredible video directed by Mark Romanek. The delivery of Cash’s vocals combined with the powerful imagery of his life being cast aside, almost forgotten about really makes for an emotionally charged experience. It’s visual poetry. The video was named best video of all time by NME in 2011. Cash’s cover was released in March 2003, the same month that his wife, June Carter passed away, and only a few months before the man himself would also pass. It might be the best example of a swan song, ever, and it really shows the versatility of music and song writing.

2: A Song That Brings Back A Lot Of Memories.

I’m not going to dwell on this one too much. This song was a fave of a girl called Fran. Many years ago she was my girlfriend and a few years ago she took her own life.

3: A Song That You Like With A Number In The Title.

Creed are awful, we all know that. However, for about 5 minutes, before they were big, they made ONE song that’s good, and they called it… ONE. Maybe they knew it was going to be their ONE good song. I mean, I doubt it, that kind of self reflection is lost on Scott Stapp. If it wasn’t he wouldn’t have the fashion sense he does.

4: A Song That Makes Your Heart Flutter.

All I Need by Air.

Make sure you watch the video for this. It’s important. You’ll notice that I am including the videos as my visualisation of songs is often heavily linked to them. I used to watch a lot of MTV and VH1, and so, even when just listening to songs, I’m often replaying the video in my head, or making up a video for it based on the sounds. The video for All I Need was directed by Mike Mills and serves as, and I know I’m using the word incorrectly, but you’ll understand what I mean, it serves as an introspective look at a couples relationship. The song plays over the top, with dialogue from the couple cutting in. It’s very sweet. Sadly, we don’t get interesting music videos like this much anymore!

Not much of an explanation needed, I don’t think. It just does!

6: A Song You’d Listen To When Stargazing.

I doubt there’s a better song to listen to whilst staring up into the night sky, or, as The Life Aquatic showed us, whilst exploring the depths with an oceanographer hell bent on killing a rare shark out of vengeance. Specific.

7: A Song You’d Dedicate To Your Best Friend.

8: A Song You’d Dedicate To Your Lover.

9: A Song In A Different Language That You Love.

Perfect Wave, before you ask. Just a good song, innit!

Idiot by Sure Sure.

Think I’ve made my point with the song title. Also, this is a good song so don’t just ignore it.

12: A Song That You’d Play Using An Instrument.

Get Off by The Dandy Warhols.

Haven’t thought about this song in about 20 years, but when I read the topic, this was the first thing that came to mind. Still remember how to play it.

13: A Song That You’d Listen To Over And Over Again.

15: A Song With Vocals That Shocked You.

17: A Song That You’d Play While Driving.

21: A Song That Reminds You Of Your Friends.

22: A Song That Makes You Want To Fall Inlove. One Word: INLOVE.

23: An Underrated Song That You Think Everybody Should Listen. To? Listen To, Maybe?

24: First Song In Your Playlist. WHICH ONE?!

25: Last Song In Your Playlist. WHICH FUCKING ONE?!

26: A Very Famous Song That You Love.

29: A Song That Makes You Want To Travel.

30: A Song That Reminds You Of School.

33: A Song That Describes Your Current Feeling.

34: A Song That Was Given To You By Someone Special.

36: A Song That Describes Your Crush.

37: A Song That Describes Your Past.

38: A Song With An Amazing Bridge.

39: A Song In A Different Language You Cried To.

40: A Song In A Different Language That Brings Back A Lot Of Memories.