I think, THINK this is my fave Christreena song. Did I tell you all I met her? Yep. I met Christina Aguilera. Here we are: 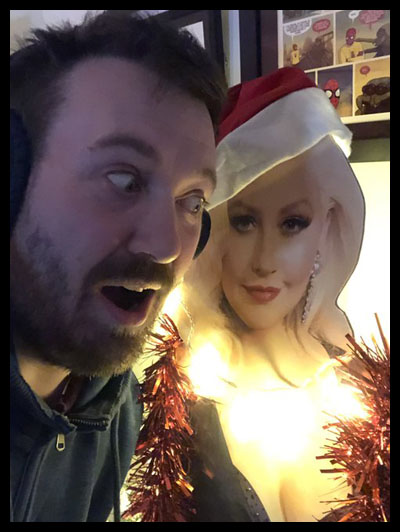 She didn’t do any singing because she said she felt a bit… flat… that day. 😉 So. Yes. This is my fave song of hers. It’s just a stupidly good vocal performance of hers. It shows off her range and has her singing at the edge of the limits of her voice, which is my fave Aguilera singing state. The little growl she gets as she hits it. Sublime.

Eyes Without A Face – Billy Idol

Right then. This has appeared on every single chart I’ve ever done. I was contemplating the other day that this might be my fave ever song. Roads, which is what I usually cite as my fave ever song, has only appeared in one or two of the charts. Maybe this has overtaken it and I’ve just never given it the full consideration. I obviously love it, I love to talk about it as well. Interesting fact, that I’ve mentioned before, I’m sure… In the video he was wearing contact lenses, but because of all the fire and how hot it got, they fused to his eyeballs. How lovely. Who doesn’t love a good eyeball fusing.

Another song from last years chart. Nope, I’m lying! It was 28 in 2017. Jesus. It’s just dawned on me that we’re about to hit 2020. How futuristic does that sound. The main benefit of this is going to be we can start referring to it as the twenties and be done with people not knowing to call the decade the tens or the teens or whatever. Finally. Don’t even get me started on the “naughties”. Fucking idiots. Anyway, This is Kettering. I’ve spoken about it before. Don’t pester me for musical commentary on songs I’ve already covered. It was Midnight Music 273. Here’s what I wrote… “This is a biggy. This song, by The Antlers, is from 2009 and I’d forgotten about it until I heard it purely by chance the other night. It’s amazing, I can’t believe it escaped me. From the album Hospice which the band self released, later to have it remixed and re-released in the same year, this song, track 2, is definitely the standout song. Never released as a single, which I guess makes sense, it’s incredible. Lyrically incredible, vocally incredible, musically incredible, tonally incredible. Here is, and I don’t feel like I’ve said incredible enought, the incredible Kettering.” Yes. I wrote ‘enought’. Fuck off and get your own website.

Finally *fist bumps his chest* something new to write about *fist bumps chest again*. This is the best James Bond song that’s never been a James Bond song. Possibly one of the best pieces of marketing ever as well. Produced for Deadpool 2, featuring a video that was used to promote the film, it’s a masterclass in how to advertise something without it being too in your face. Celine still has it as well! I think this was pretty much right as she left her residency in Vegas where she’d been performing for like 308 years. Interested to see what else she puts out in the coming years!

Once more, and I can’t stress this enough, if you’ve not seen Never Stop Never Stopping, GO AND FUCKING WATCH IT! It seemed to pass a lot of people by, which is a crying shame as it’s fucking amazing. This is probably my fave song from it. The lyrics are incredible and written in such a brilliant way to make it flow effortlessly. As usual, I always love hearing stuff sung that you don’t normally hear sung. Here we get Garbage Pail Kid, and “You can land a helicopter on that big potato forehead”. I mean, come on, just go and watch it!

Firstly, I’d like to point out that Kenny Loves Gin. Couldn’t miss an opportunity to point that out. Secondly, let’s just take a quick look at this video. Something happens in it for a split second, and I’m not willing to let it pass by without piling on some heavy criticism. Before we start, let me clarify that I LOVE this song. It’s a go to on many occasions for me. I love it for getting me motivated and making me feel like I’m ready to do stuff. So, in the video, Kenny escapes from Jail. We don’t really need the details here, but he escapes from Jail. He goes and finds a car to steal and then drives to an area of town where like a load of people are hanging out looking like they’re ready for a dance number in a Michael Jackson video. He asks them where to find this girl that he has a picture of. YES, it is Virginia Madsen, well spotted you! They don’t seem to be that helpful at first, but then this guy is all “I totally know where Virginia Madsen is, I’ll show you”. So then he goes there and breaks in through her window, only to find that she’s a fucking sociopath… 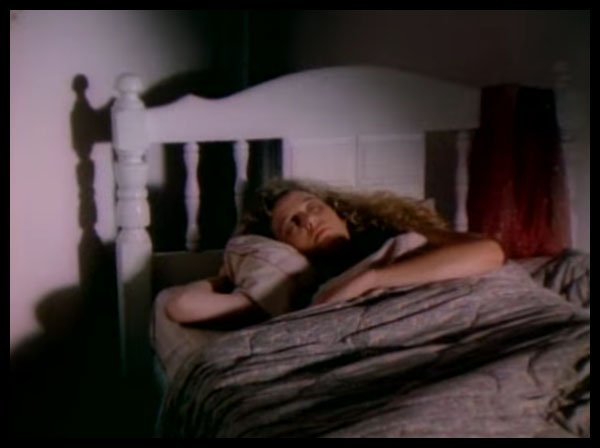 WHO THE FUCK PUTS A BED IN THE CORNER OF THE ROOM POINTING OUT INTO THE MIDDLE OF THE ROOM AND DOESN’T HAVE IT NEXT TO THE FUCKING WALL. SOCIOPATHS! THAT’S WHO! Anyway, we’ll deal with the rest of this video another time. I don’t want to get too distracted.

Think we covered this on the previous post about it. It’s the one that I had the live and normal version in the chart. All I will add is that I really like the video that someone made for this. It’s not an official video or anything and as far as I know, an official video doesn’t exist. I just think it works perfectly.

Another of the indie/synth/electro artists to penetrate the chart this year. I just wanted to say penetrate. Tee hee. Satin Jackets should be on your list of artists to check out.

Last years number 1 has fallen 30 places. I was just going to copy and paste the thing I wrote then, but I literally wrote “It comes and goes, yo”. I’m so unreliable when it comes to helping future Chris from the past. Shame on me. I still love this song. Started to learn it on the guitar, but I need to practice it a lot as it’s fiddly for me to do!