That’s right. James Blunt. He’s one of my favourite human beings. Why? Because I think he’s quite simply brilliant. Others seem to hate him, something I’ve never quite understood. I thought I’d just break him down a little bit and examine what it is he offers us and to see if there is anything to actually get annoyed with.

His music then. For this I’m just going to examine one of his songs. We could just jump straight in with “You’re Beautiful” but let’s avoid the obvious choice and choose another. I’ve taken a song from Back To Bedlam, his debut album and best selling. I’ve not gone for anything more recent as THIS is the album that seems to make people hate him, it’s where the hatred comes from.

Also, since we’re going to talk about this a bit, here are the lyrics:

Did I disappoint you or let you down?
Should I be feeling guilty or let the judges frown?
‘Cause I saw the end before we’d begun,
Yes I saw you were blinded and I knew I had won.

So I took what’s mine by eternal right.
Took your soul out into the night.
It may be over but it won’t stop there,
I am here for you if you’d only care.

You touched my heart you touched my soul.
You changed my life and all my goals.
And love is blind and that I knew when,
My heart was blinded by you.

I’ve kissed your lips and held your head.
Shared your dreams and shared your bed.
I know you well, I know your smell.
I’ve been addicted to you.

I am a dreamer but when I wake,
You can’t break my spirit – it’s my dreams you take.
And as you move on, remember me,
Remember us and all we used to be.

I’ve seen you cry, I’ve seen you smile.
I’ve watched you sleeping for a while.
I’d be the father of your child.
I’d spend a lifetime with you.

I know your fears and you know mine.
We’ve had our doubts but now we’re fine,
And I love you, I swear that’s true.
I cannot live without you.

And I still hold your hand in mine.
In mine when I’m asleep.
And I will bear my soul in time,
When I’m kneeling at your feet.

Now, a lot of his criticism comes from his voice. Not much we can do about that really, so if you can’t get passed his voice, there’s no hope for you. Having said that, his voice is also one of his most praised features. So, make of that what you will. For this reason, we’re not going to talk about his voice, other than to say that someone’s voice is no reason to hate them.

Aside from one couplet in this song, I think it’s very well written. And it IS well written. The two lines I take issue with are “I’ve seen you cry, I’ve seen you smile. I’ve watched you sleeping for a while.”. The main reason for this is that it smacks of just not being able to rhyme something else with smile. Unless she’s got piles then you’ve nowhere else to really go. Anyway, I don’t like those lines, but other than that, it’s well written on the whole, so unless you want to be hyper critical, there’s really no reason to hate him for that.

Is it the arrangement? Well, the song style perfectly fits the lyrics and sentiment. The simplicity reflects the openeness of sharing his feelings etc. All the usual stuff. There’s not really any way of making this better. Sure, you could arrange it for an acoustic guitar, someone on YouTube will have…

I mean, what else could improve upon that aspect? Playing it on a tuba? I highly doubt it. So, there’s nothing really to hate there.

I guess the only reason to hate this song… and I think I need to clarify something here… Obviously, there are those who just don’t like this kind of music, hat’s fine, it’s not them I’m talking about. It’s the people that swing to the other side of, “James Blunt? *shrug*”, into actively hating him. So, the only real reason I can come up with on this front is sentimentality. Songs can work brilliantly. There’ll be people that instantly connected with this song, those that it will have totally helped. I do however, think this song is a little too… saccharine. It does sway a little too much into being overly nice. But again, that’s no reason to HATE it. At the end of the day, wouldn’t anyone want someone to love them that much?

So, personality wise, I don’t think it’s possible to dislike the man. He gets so much shit from people on Twitter, yet he handles it better than pretty much anyone I’ve ever seen. Just look… 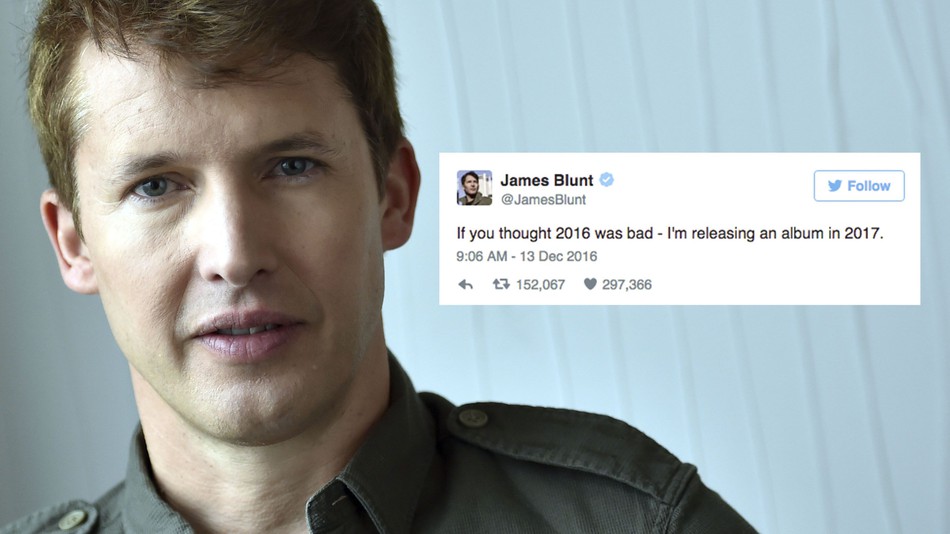 See what I mean? How can you dislike someone who is that good at parrying!

I don’t expect to have changed anyone’s mind on James, but if you do hate him, for the love of God, just give him a chance