So, Doom! Where to start. I guess the first thing that needs noting is that this is a game made by id Software. id are the Grandaddy of FPS gaming. Having spent the 90s defining the FPS genre with games such as Wolfenstein 3D in ’92, Doom in ’93 and Quake in ’96. They spent the time in between those years adding subtitles to those same games, giving us titles such as Doom II: Hell On Earth, Ultimate Doom, Final Doom, etc. They came back in 2004 to make the much loved Doom 3, before disappearing again only to resurface in 2010 with Quake Live and then in 2011 with Rage which seemed to divide people. These games started their relationship with Bethesda.

After the success Bethesda had with their rebooting of The Wolfenstein series at the hands of MachineGames, I guess they thought why not go for Doom! 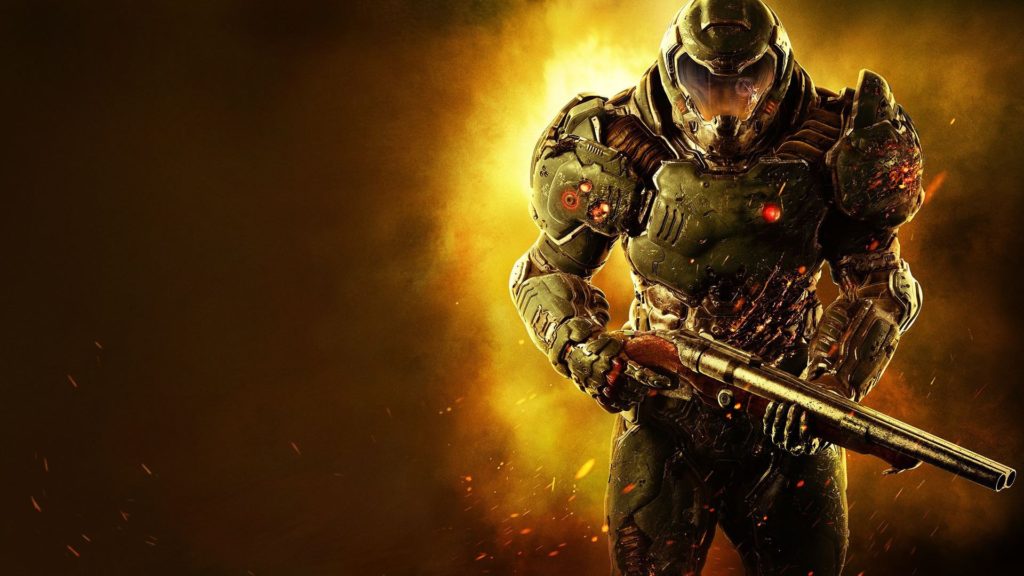 So, what’s the setup? You’re on Mars. Some dudes have opened a portal to Hell and monsters are coming through it. Want more plot? You’ve come to the wrong game! As you traverse through the game, there is scenes of storyline and exposition but it’s all secondary to the chance to just kill a lot of stuff. I’m not saying this like it’s a bad thing, either. I don’t think anyone is buying Doom with the hope of getting the same sort of emotional roller coaster that you might find in The Last of Us or Alan Wake. You buy Doom to kill stuff and that’s exactly what you get.

The new Doom feels very much like a Doom game, in that a lot of things that you take for granted in modern FPS games are no longer there. Want to run into battle and then hide in a corner whilst your health regenerates, I don’t think so! Want to fire off a few shots and then reload ready for the next enemies, not today! Feel like locking on to cover and using it to pop out of to reduce your damage, sort your life out!

Doom very much goes back to it’s roots. Health is picked up, not regenerated, the same goes for armour. Whilst you can hide behind stuff to avoid damage, the enemies will rush at you and flush you out. Your ammo is all in your gun, there is no reloading (with the exception of the Super Shotgun), and you can’t do it manually as there is no need. In fact, your usual reload button of X or square depending which console you’re on is actually the button that brings up the chainsaw! Your ammo is always available and is shared between gun types. Using the Super Shotgun takes ammo from the Combat Shotgun as well. The key to tackling this old school style is to keep moving, at the incredible pace that the game moves at, don’t let the enemies build up and pick up the Quad Damage whenever you see it! Additionally, all gun play takes place from the hip. There is no fine aiming, pretty much. 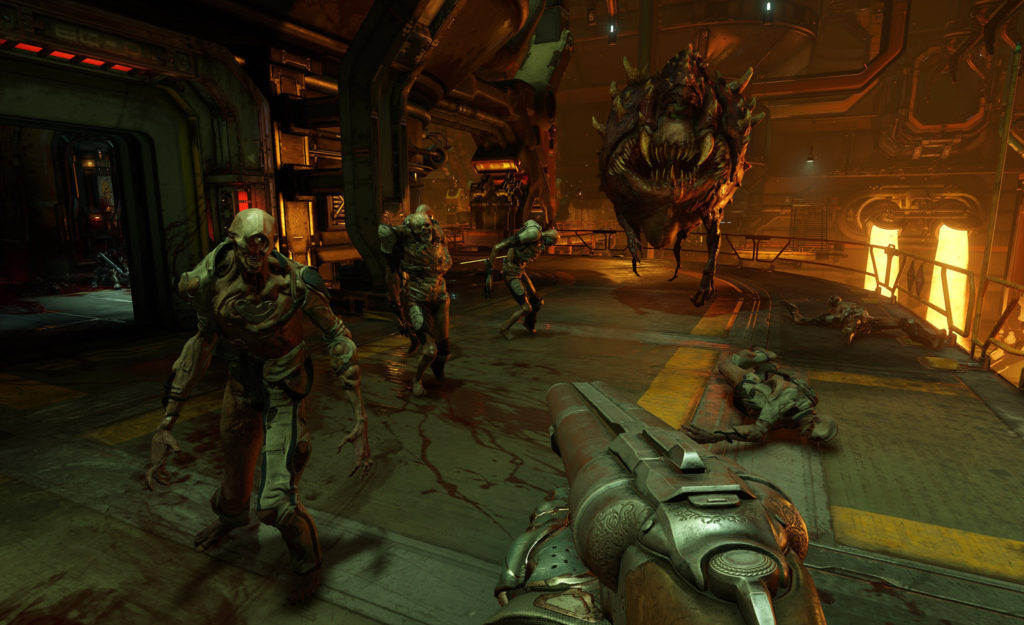 The first act is very much a set-up for the rest of the game, with new guns periodically given to you as you traverse your way through the Mars base. It’s impressive that they’ve manage to keep the aesthetics of Doom 3 intact without making the game look or feel old. Doom 3 was 12 years ago, after all. The environment is littered with power ups and collectables. The former giving you temporary abilities and the latter giving you permanent increases in life, armour, damage, etc.

Weapons are upgradable using points gained from finishing challenges which are active throughout each level you play, as well as being awarded for killing as many enemies as possible. These points are spent adding alternative fire conditions for each gun. The combat shotgun, for example allows you to either fire a quick blast of three rounds, or adds an explosive grenade type round. Each one has to recharge before it can be used again and is accessed by just pulling the left trigger!

Despite all this attention given to the guns, most of it seems redundant. Maybe it’s just me, but I think I’ve gone through every Doom game I’ve ever played with pretty much only the Double Barrelled Shotgun. In this case, it’s the Super Shotgun. Other weapons only get used when I run out of Shotgun ammo. I can’t be the only one who plays this way. I think part of the problem is that everything else seems week, with the exception of the BFG, and the Double Barrelled Shotgun is the weapon that makes you feel most like a demon slaying badass. The Rocket Launcher doesn’t feel like a Rocket Launcher and has hardly any blast radius at all. The only time it comes in handy is if you have the homing upgrade for it and you’ve got enemies out of range. It’s a complaint, but a minor one, given how much fun the shotgun is, you’ll find yourself not caring.

To break up the largely linear levels, ‘Runes’ are thrown in from time to time. They offer up different challenges that take you away from the level into a small arena. Generally speaking they are set out as Kill X enemies in X amount of time using X weapon. The amount of time you’re given is minimal but you can win more time from each kill you get. On completion of these challenges you’ll be rewarded with the ability to fill one of three rune slots with said runes. Their abilities range from allowing you to absorb health and other items from further away, to being able to recharge your weapons special abilities faster.

After I had grabbed the one for absorbing stuff at a larger distance, which is arguably the handiest of them, I genuinely forgot about them. As I did to be honest with a lot of the upgrade type pick-ups. Apart from the ones that upgrade overall health, armor and ammo. Like I stated, as I was mainly just using the Shotgun, they didn’t really seem relevant. I did seek them out however, since they had achievements attached to them, but would always to forget to equip them. At one point I had about 15 or so upgrade points for weapons just sat there as my Shotgun was fully upgraded and I wasn’t bothered about doing the other guns.

There’s a little scope for exploration on some levels and it’s usually easy to see where secrets may be hidden. The main path forward is usually guided by green lights on stuff allowing you to deviate without getting lost. Not too dis-similar to the red doors, ramps and beams used in Mirror’s Edge.

The main new feature of the game is the Glory Kills. If you damage an enemy enough without killing him, he will begin to glow blue, close in on him and he will turn orange which means you can hit the right thumbstick and perform a gory melee kill that will usually involve you either punching his/her face into non-existence, ripping off a body part to beat them with, or just hitting them so hard they evaporate. This pretty much comes from the 2012 mod for the older Doom games, called Brutal Doom. They live up to that name. What I find most handy about these, and something that isn’t told to you during gameplay… unless I missed it… is that whilst executing one, you’re invulnerable, which means they are amazingly good for recovering, as usually, the guy whose day you just ruined will explode into a shower of health! They’re a lot of fun and an easy example of why this is an 18. 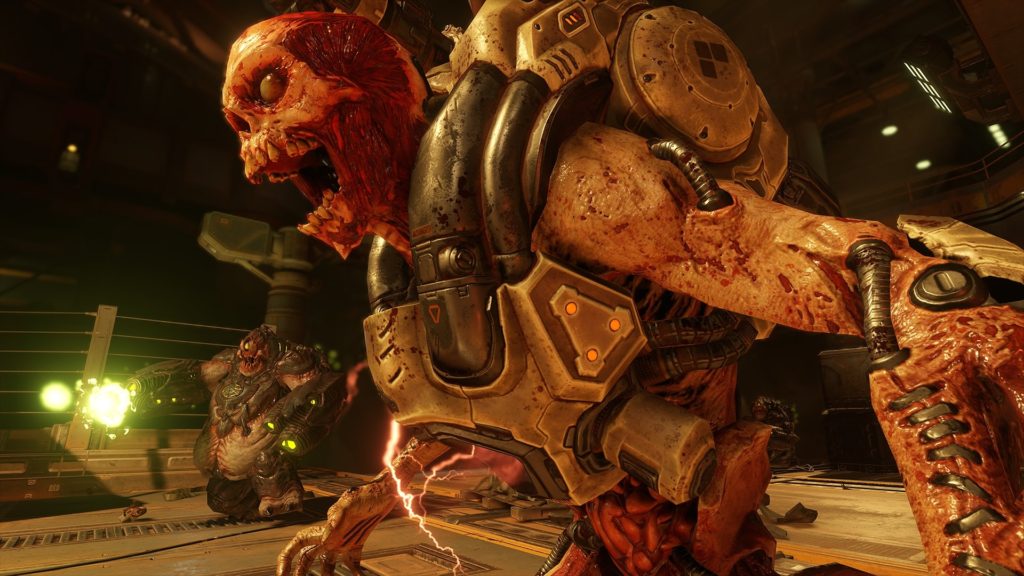 The multiplayer is a mixed bag. It’s fast and plays largely like the single player, which is great, but there’s something a little off about it that I’ve yet to put my finger on. I don’t know if it’s not fast enough, after the blinding speed of say Quake III: Arena, or what. It was underwhelming, but still a fun mode to play. The map editor is good if not a little fiddly. One amazingly good feature is that there is a playlist of user made maps that is on continuous cycle, so it’s unlikely you’ll ever play the same map, which is pretty cool. I haven’t played enough of the multiplayer to properly review it though, so those are just my initial thoughts.

Overall, the game is a perfectly good reboot that is immensely fun to play. It’s quick paced, ultra violent, and the level design is excellent. Each encounter feels well weighted and has clearly been thought out like a multiplayer map. Thanks to the difficult being definitely skewed towards the harder end of the spectrum, it makes you approach each new area with trepidation. Even on “Hurt Me Plenty” which is the games traditional ‘Normal’ difficulty, it still feels challenging. I’d happily give this game 8.9/10.